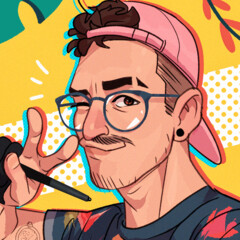 Hi! My name is Victor Regis and I'm a 25-year old freelance illustrator based in Brazil! I graduated in 2016 as a Digital Design Major on PUCPR, but immediately turned into freelance comics and illustration as my main source of income.

On top of commissions and freelance work, I also self-publish a web comic called Hexile - one of Tapas' and Webtoon's Staff Picks in 2016 and 2019, respectively. The first printed issue was released on spring 2019, with more to come very soon.

In 2021, I was featured in the Flash Facts anthology published by DC Comics, in the story "If You Can't Take the Heat" written by Varian and Darian Johnson.